The art of changing boundaries

In my last post (http://newstonoone.blogspot.com/2015/06/the-boundaries-of-reason-possible-shape.html) I spent some time looking at the likely impact of the impending boundary changes on the numbers of seats in different regions and the potential impact on the seat numbers of different parties.  In this post I shall look at how the detail of the boundary review might assist or hinder the different parties.

What, however, would be better for the national parties?  To answer this, we need to think about what the parties need.  They will simultaneously wish to:

But these aims are inconsistent, so the parties will need to choose which are most important to them.  This will vary for each party.

Right now the Conservatives are fairly content with how things stand.  They have an overall majority on a lead of 6.5% of the national vote share.  They will retain power, however, only if they have a substantial seat lead over Labour so they need to ensure first of all that the smallest possible poll lead will produce the most seats possible.  If they go below that level they're expecting defeat anyway so the margin of defeat is less important than maximising the chances of success at or above that level.

Labour, by contrast, are already in a losing position.  The current shares of votes are unacceptable to Labour and they need to plan on the basis that they are going to do better.  They will want to ensure that small improvements in their vote share will result in as many extra seats as possible.

From Labour's perspective a reduction in their notional seat count now following a boundary review may not necessarily be bad news if the result is to bring the possibility of winning more seats in play in 2020 should their vote share improve.  They shouldn't be planning on the basis of their current vote share: that is a losing proposition, as we saw in May.

For example, York Central and York Outer are respectively a safe Labour and safe Conservative seat.  If they were combined and then divided on a homogeneous basis, the Conservatives would have two marginal seats that would both fall on a swing of just over 3% to Labour.  Labour might conclude that such a reorganisation might suit them if they were working on the basis that a swing of 3% was the minimum that they were targeting.

So each party needs to identify a seat share that they regard as the minimum acceptable and then take decisions on the boundary review with that in mind.  There is no point in Labour giving up a seat in the manner described above if it is not going to be recouped on a smaller swing than that presently required for their target number of gains.  And there is no point in the Conservatives seeking a redistricting that results in a notional gain on current vote shares if it makes retaining power on a slightly lower vote share harder.

Selling the strategy to incumbents may on occasion prove difficult and that cannot be overlooked.  In particular, the Conservatives want to get the boundary changes through if they can since it will in general benefit them.  So they don't want to upset incumbents unduly: they have a vote on the matter.  It may be better to get an arrangement that isn't the very best for the national party if it is decent enough and keeps an incumbent happy.

As for the best tactic for each party in a given area, much will depend on the detail of local voting patterns.

But some general tactics are apparent.

In the south of England, Labour's weakness actually simplifies its strategy.  Some seats will look likely to drift out further of Labour's reach as a result of the reduction in seat numbers and these strict limits on seat sizes - larger seats will generally favour the party that is dominant in the area still further.

The process will be uneven.  For example, on the general election registered voter numbers Cambridgeshire and Suffolk would be due an additional seat between them even with a seat reduction from 650 to 600.  Meanwhile, Peterborough is below the minimum number of registered voters so it will need to take on more rural (and presumably Conservative-voting) voters from an adjoining constituency.  Ipswich, another constituency where Labour has a keen interest, is likely to suffer the same fate, being a constituency only just above the minimum threshold for registered voters in a county which elsewhere has oversized constituencies.

But some seats where Labour are interested will actually need to be reduced in size.  In more populous seats in which Labour have some strength, like Watford and Waveney, Labour will be looking to shed outlying rural districts from the constituency which will be presumed to be more Conservative in the hope of creating a Labour seat.

In less populous adjacent constituencies with Labour strength, Labour will seek to construct a new seat which takes the best of their support from both.  The tactics here can be trickier.  Both Luton seats are undersized.  Do Labour seek to have the core made into a single seat, accepting the loss of a single seat but creating a single Labour stronghold, or do they accept the attachment of large rural areas to each in the hope of getting both but risking losing both?  Given their current seat tally, they need to take the chance, I think.  This gives the concept of political betting a whole new meaning.

I expect that Labour will have similar thoughts about Brighton and may well seek to despatch Caroline Lucas by providing her with a new cohort of Labour voters to challenge her grip on her seat or partitioning the seat out of existence.  And both main parties may well seek to partition isolated Lib Dem constituencies like Southport, Sheffield Hallam, North Norfolk and Leeds North West.  Even as the electorate becomes less and less inclined to vote for one of the two main parties, the minor parties will find it harder to get or keep Parliamentary representation.

By means such as those I described above, Labour managed in the mid-1990s to get a boundary review that actually worked against the Conservatives by bringing into play seats that would not previously have fallen on a landslide.  Might such tactics work again?  It would be much harder this time, as can be illustrated with four pictures: 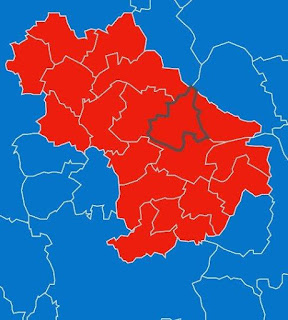 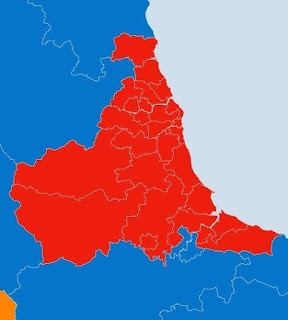 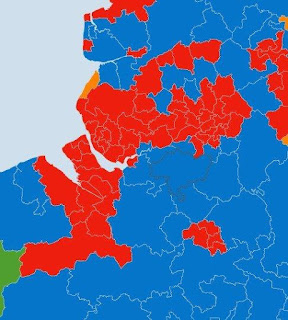 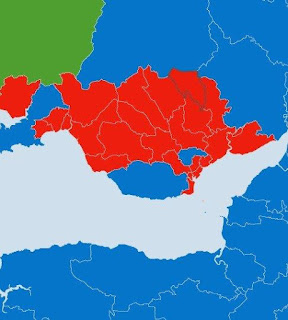 In these four areas, Labour have over 100 seats in solid blocks.  All four blocks will suffer substantial reductions in seats under the review. If the seat count is reduced to 600, three of the 18 Labour seats in Birmingham and the Black Country, one of the four Labour north east Welsh seats, two of the 18 English Labour seats in and around Merseyside, two of the 22 Labour seats in and around Manchester, three of the 26 Labour seats in the north east and four of the 19 Labour South Wales seats look set to go.  That's nearly a third of the seat count reduction accounted for already (and the seven seat reduction in Scotland and two seat reduction in Northern Ireland will do the Conservatives no harm either, taking us up to 24 seats lost from Parliament without the Conservatives having to leave the sofa).

The chances of offloading any of these 15 seat losses in Labour heartlands onto other parties looks limited, given the solid nature of these Labour blocks, painstakingly built over a generation.  Labour will be doing well if it avoids a dozen notional seat losses in its heartlands before it gets started.
Conclusions

A reduction in seat count to 600, if achieved, is likely to benefit the Conservatives nationally considerably.  It would be bad for Labour and particularly bad for the Lib Dems, with serious challenges for both the Greens and UKIP.  Each party would need to think carefully about how best to protect its position, bearing in mind what they are trying to achieve in 2020 rather than focussing on what the reorganisation would mean in the context of the May 2015 result.
But will it be achieved?  Conservative incumbents are going to need a lot of reassurance before they are going to feel able to support it because their seats are likely to be chopped and changed a lot.  That process of reassurance hasn't started yet.  The Conservatives need to decide whether they want to try to get this through.  If they do, they need to start laying the ground right away.

This post first appeared on politicalbetting earlier this afternoon:

http://www2.politicalbetting.com/index.php/archives/2015/06/29/guest-slot-the-art-of-changing-boundaries/
Posted by Alastair at 17:56