The constituency markets today: putting the jigsaw pieces together

Over the last few days, I've been looking at the constituency markets on a party by party basis, sorting the seats by the implied probability that the bookies have given to each party in turn and looking at what that means for them both in general terms and in specific seats.  I attach links to each of them below:

Some of the prices are already slightly out of date, particularly following the rapid shortening of SNP prices over the weekend (but some of the UKIP prices are also a little out of date and the latest set of Lord Ashcroft's marginals polls have also moved those markets).

Now it's time to put together the overall picture as it stands at the start of November 2014.

What are the implied seat counts?  As I have previously noted, the bookies often use 5/6 for 50:50 bets, allowing themselves a profit margin.  As of today's date, the markets find that the parties have the following number of seats priced at shorter than 5/6:

You can decide for yourself how to allocate these.  Giving them to the current favourites (halving them where there are co-favourites) gives the following totals:

This would be almost an exact reversal between the Conservatives and Labour from the present position.  It would of course also be another hung Parliament.  I'll leave you to have your own fun imagining the manoeuvring in such a Parliament.  I expect we'd either see a minority Labour government or a Labour/Lib Dem coalition.  The latter would make for more stable government, but the tribalist instincts of a Labour party that has nursed a hatred for the Lib Dems for the previous five years would be hard to overcome.  The 7/1 on a Labour minority government that is widely available looks good to me.

How stable is that projected outcome?  For Labour to get to an overall majority, they would need to take another 18 seats. With the movements in the prices on Scottish seats, their task has got slightly harder on that front. This would entail them taking a seat where they were currently priced at at least 6/4.  And it also assumes that their position does not get worse in Scotland relative to the SNP (or, for that matter, start losing seats to UKIP).  As it would happen, there are a string of a dozen straight Conservative/Labour marginals between 5/4 and 13/8.  But Lord Ashcroft's marginals polls from 4 November show that while Labour are making inroads into the Conservative marginals, at present the swings required are quite a bit short of the levels required to take seats in this bracket.  So for Labour to get an overall majority it will need to improve its polling (or its performance in the marginals) a fair bit from its current position.  This does not seem immediately particularly likely.

Meanwhile, Labour needs to steady the ship in Scotland in particular.  There have now been three polls in a row showing the SNP with a substantial lead over Labour.  So far the constituency betting markets imply that they will lose only three seats to the SNP.  If their polling does not improve, that will rise.  The YouGov poll, which was the most favourable of the three from a Labour perspective, represents a 19% swing to the SNP from Labour.  That would result in Labour losing a further 26 or so seats on a uniform national swing.  That would greatly increase the difficulty of Labour getting an overall majority.  Even losing half this number would mean that Labour would need to win seats where they are currently priced at 9/4.  Losing 26 seats would require Labour to take seats in the 11/4 range.

Given that the polling in Scotland is showing them this far off the pace at present, for Labour to secure an overall majority would require the following:

1) Labour to improve markedly its polling in Scotland (such that the constituency prices in place now were ultimately justified)
2) Labour's polling in England & Wales to get no worse over the coming months - but there has been a consistent trend over the last few months of decline in Labour poll ratings, as shown here (click to enlarge): 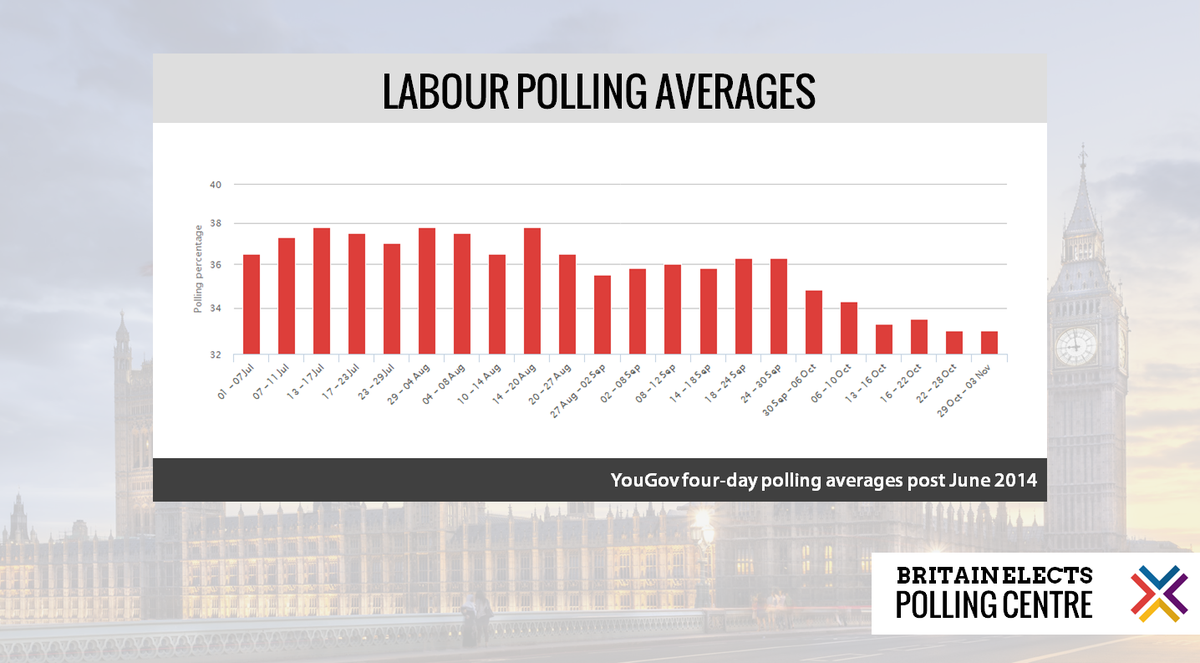 3) Labour must start polling rather better in the marginals against the Conservatives in particular than they are doing at present, assuming that Lord Ashcroft's polling is roughly accurate.

So a Labour overall majority does not look an enticing bet, even with Labour currently being predicted to get 308 seats by the constituency markets.  Given what is happening in Scotland, it's probably best to discount this total by 10 to 15 seats for now.  Oppositions rarely see their position improve in the run-up to an election, so 295 seats seems a reasonable seat tally to envisage for Labour, with a bit more potential to see them surprise on the downside than the upside.

But the Conservatives should not feel smug either.  Their polling also is pretty dreadful, a point masked largely by the current focus on Labour's weakness.  They do not benefit one iota from Labour's problems in Scotland - not a single seat falls into the Conservatives' laps as a consequence.  If they are to improve from the current projected 266 I note above, they are going to have to start doing better in the polls.

That's a reasonable enough hope for a party of government in the run-up to a general election - it often happens.  But it's not inevitable and sometimes governments see no improvement in their polling in this period.  The Conservatives getting around the 265 mark is entirely conceivable.

Indeed, the Conservatives face their own challenges with UKIP.  So far UKIP are projected by the constituency betting markets to pick up 6 seats.  But prices on UKIP are shortening all the time at present and it's not hard to see how that number might double or more in fairly short order.  Even if the Conservatives' polling position starts improving, they might find that they are shipping seats to UKIP nearly as fast as they are gaining them from Labour.  It's hard to see how the Conservatives could get much beyond 300 seats without the kind of dramatic move in polling toward them that we have so far conspicuously failed to see.

So the first conclusion is that the bet on a hung Parliament (best price 8/11 with Winner and TitanBet, two outfits I have to confess that I've never heard of, and 1.7 with Betfair) is a great bet even at this fairly short price.  It's hard to put a precise number on this, but it looks shorter than a 1/2 shot to me.

As to who will get most seats, that looks like a real cliffhanger.  I would make Labour marginal favourites right now, but it looks very marginal indeed to me.

I want to address one argument that you often hear trotted out on this subject.  It's often suggested that because there will be fewer Lib Dem MPs, the window for a hung Parliament has narrowed.  Accordingly, it is argued, the odds of a hung Parliament must therefore be longer.

I disagree strongly with this argument on two counts.  First, a narrowing window does not mean that a hung Parliament is less likely if the seats within that narrower window are not particularly marginal.  But secondly, the window doesn't look as though it is going to narrow all that much.

The Lib Dems are now expected by the constituency betting markets to pick up 31 seats as a par result.  Add the six UKIP seats, the 15 1/2 SNP seats, the three Plaid Cymru seats and the Green seat and you're up to 56 1/2 seats - ten (and a half) down on last time.  Bear in mind that the SNP on current polling would get a considerably higher tally, that UKIP have not reached the limit of their ambition and the Lib Dems may yet do better than expected and it is far from clear that the number of mainland British seats held by parties other than Labour and the Conservatives is going to shrink at all.

The "over" bets do not currently look attractive, since there are at every level fewer seats where UKIP are priced at a shorter price than the number of seats quoted for, and the level of correlation between seats is untested.  The "under 19.5" at 9/2 would be a marginally OK bet, were it not for the fact that the odds on this bet will almost certainly improve after the presumed UKIP victory at Rochester & Strood.  It's a market worth keeping an eye on as the constituency markets change, but right now I'm not playing this one.
Posted by Alastair at 07:29