2020: the geography of Labour's next campaign

A boundary review is due and it is likely that many constituencies will change considerably, so there is no point in looking at the 2020 marginals yet - we don't know where they are yet.  But we can look in broad terms at how the election is likely to be fought.
The starting point has to be the current map of the constituencies. 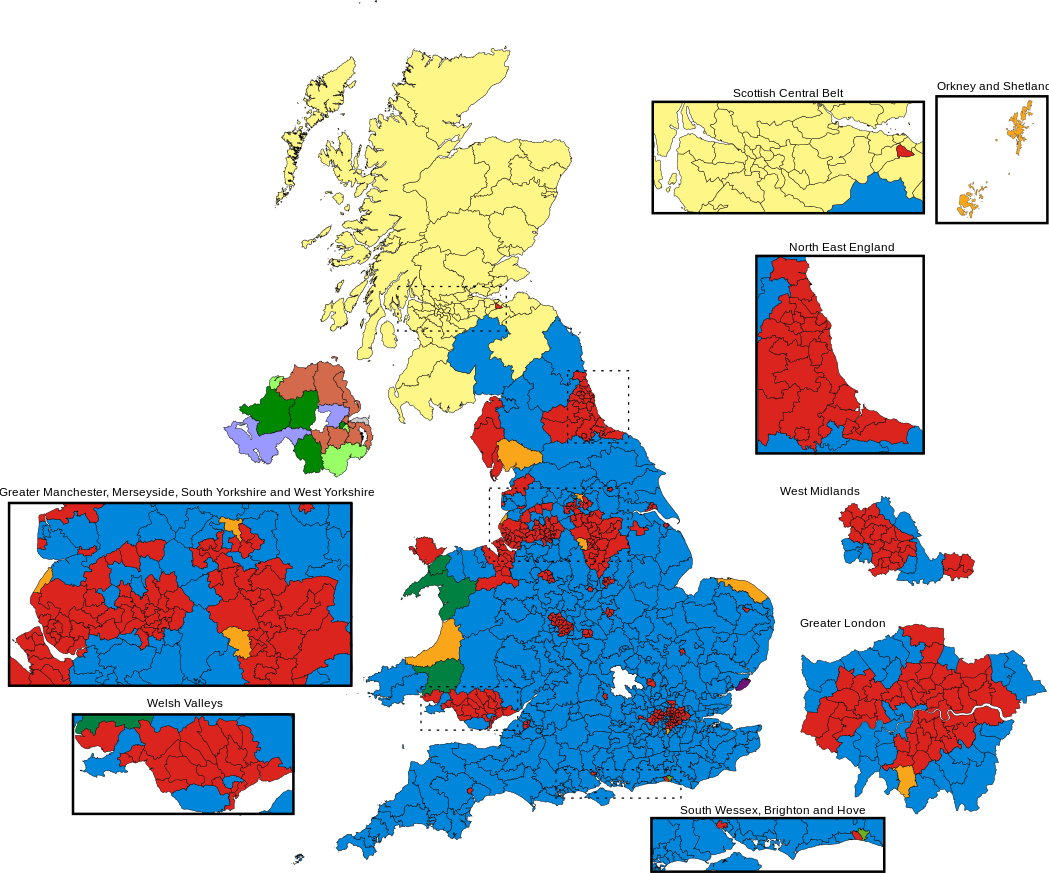 Every picture tells a story and the story this picture tells is on the surface fairly clear.  Northern Ireland is its own special patchwork.  Scotland is an SNP fiefdom.  England and Wales are dominated by the Conservatives except in some very specific areas.
The effect is exacerbated by the different sizes of the constituencies.  I give below the same constituency map but this time presented with each constituency represented by an equal-sized hexagon: 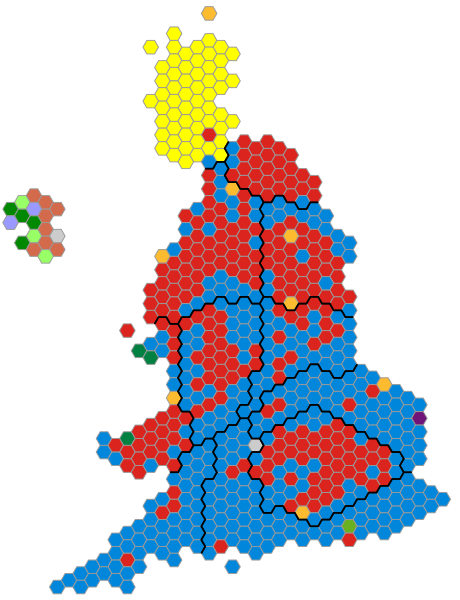 Scotland has shrivelled.   Meanwhile, the Conservative dominance in England and Wales is now not quite so overwhelming as the Labour-held areas have dramatically expanded in size.

Both of these maps have important things to tell us.  The second map shows that the Conservatives are not so far out of sight of Labour as some of the commentary since the election would have you believe.  And the first map shows that Labour are nevertheless barricaded in a few heartlands that take them nowhere near a majority.  Labour need to break down those barricades.
Where do Labour retain strength?  A glance at the first map will tell you the answer: London, the English Core Cities, Hull, Leicester, Coventry, Stoke, south Wales, the north east as a whole and the wider north west surrounding Liverpool, including north east Wales.  Or, to put it more briefly, by and large, big cities.  With worryingly few exceptions, Labour have become an almost exclusively metropolitan party.  They have lost Scotland and they have lost smaller town England.

(For those that haven't come across the term before, the Core Cities are a grouping of the largest cities outside London.  I wrote about Labour's deep support in these last year:
http://newstonoone.blogspot.co.uk/2014/05/core-cities-labours-reservoir.html
At that time the grouping was only of English cities.  Since then, it has been expanded to include Cardiff and Glasgow, but not, oddly, Edinburgh.)
Labour made ten gains from the Conservatives.  Only two of these seats fell clearly outside the Labour fiefdoms listed above: Hove and Lancaster & Fleetwood.  Meanwhile, the Conservatives took Plymouth Moor View, Telford, Southampton Itchen, Derby North, Vale of Clwyd and Gower.  Labour are getting close to maxing out in the metropolitan areas, but all the time are being edged out of smaller towns and cities - and Southampton, Derby and Plymouth are not really that small.
Many of the exceptions to the general picture - Norwich South, Cambridge, Oxford East, Exeter, Lancaster & Fleetwood - are constituencies with a large university presence. They may be smaller places, but they have much in common with the metropolitan areas. They are places where the words "urban professional" would not produce a curl of the lip.


The Labour leadership campaign has spent much of the time so far discussing "aspiration" at great length.  But the language is very misleading.  Labour have no problems talking to the residents of the places with the highest aspirations.  Their problem is rather how to talk with those who live in places where the average resident has ambitions that are real but more limited, the strivers and battlers.
This is not a new idea.  Here's a New Statesman article on the subject from 2011:
http://www.newstatesman.com/blogs/the-staggers/2011/09/aspirational-voters-election

As the article acknowledges, it wasn't a new idea then either.
This seems to be why Labour have been more harmed by the rise of UKIP than the Conservatives.  It seems that the Conservatives eventually found a message that addressed the hopes and fears of a fair-sized section of the strivers and battlers.  Labour did not.

If Labour want to win - by any definition of "win" - next time, they will need to reverse this trend.  They need to find a way to reach the unglamorous medium sized towns and cities of England.
Let's look again at the Labour target list on existing boundaries:

It is stuffed full of such constituencies: Thurrock, Bedford, Lincoln, Corby and Carlisle are very different places, but none of them are world centres of anything and all of them have lots of people who quietly want a slightly better life for themselves - or at least, for life not to get any worse.  However the constituency boundaries are drawn up for 2020, there will be similar such constituencies that Labour will need to win over.
Indeed, Labour are not secure in all of the seats that they currently hold:
https://drive.google.com/file/d/0Bygi8eZw-4q1Tm54TU02a3E3R0U/view?usp=sharing

If the Conservatives can broaden their appeal, they will be circling around seats like Barrow & Furness, Newcastle-under-Lyme, Derbyshire North East and Wrexham.  In all of these seats the Conservatives closed the gap on Labour from 2010.  There are others on the Labour defence list that are becoming increasingly marginal.  However the boundaries are drawn for 2020, there will be constituencies like these that are trending away from Labour.  Unless Labour changes course significantly.
More generally, if Labour does not start to broaden its appeal, it may even find that other apparent heartlands that are outside its current metropolitan focus are vulnerable to attack if other parties get their acts together. South Wales and the north east, for example, don't fit particularly well with the rest of Labour's current heartlands.  Fortunately for Labour, its opponents in those areas are UKIP and Plaid Cymru, and neither has so far demonstrated much seat-winning prowess.  But things can change.  Labour needs to recognise the danger fast.
Posted by Alastair at 07:49

Good article, as ever. It is difficult not to be awed by the scale of the challenge that Labour has. I think the most relevant number from this election is not the UK Con Maj of 12, but the Con Maj in England, which is 105 of a smaller total. This is more relevant for two reasons: the likelihood of EV4EL and the fact that it doesn't look like Scotland is going back to Labour anytime soon.

Good article. It's interesting that of the four Labour-held marginals you mention, two - Newcastle under Lyme and Derbyshire North East - were, I think, Labour even in 1983 (albeit on slightly different boundaries) - symptomatic of the long-term swing to the Conservatives in unfashionable bits of the country which balances the swing away from them in the more fashionable bits around the big cities and universities (e.g. Manchester Withington, Sheffield Hallam, Leeds North West, Bristol West, all of which have been Conservative within relatively recent times but where the Conservatives are now nowhere.)
The only place where this doesn't seem to apply is within 20 miles of Liverpool: the Conservatives seem to be losing ground in the unfashionable bits of Greater Merseyside just as fast as in the fashionable bits. The swing to Labour in the 20-odd seats closest to Liverpool at this election was remarkable and slightly puzzling.